One of my family’s favorite past times is pranking each other.  Some have been just absolutely horrible (Davy) but most are just fun.  Oh, the tales my family can tell on my sister, Darla.  I knew the hand and foot coming up out of the “grave” pic would scare the snot out of her.  (The snot comes running out because a person is crying hysterically or screaming his/her guts out.  Guts come out because the screams are so loud and violent all the guts are pushed up or down… and then out.  I haven’t determined whether it is actually up they come out or down.  Either way,  I have never had to scream my guts out… just almost.)

Darla has not only screamed her guts out and had snot running out but has also been so scared she has wet her pants.  Well, I think that’s true.  I don’t see why she wouldn’t have wet her pants since guts and snot were coming out.  It only makes since that pee would come out along with everything else.  I don’t believe she has pooed her pants, but how could one tell with all the guts?  I do know she has been so scared she has temporarily lost her marbles.  (Marbles/brains/cognitive thinking is totally absent for a short period of time.)

One such occasion was the day I came to get her to go wherever it was we were going.  It was Halloween Day or maybe week, but I had been driving all week with this fake hand and arm sticking out of my car.  (It was just so cool.)

She finally settled down, and I settled into laughing so hard that I’m fairly certain I did actually pee my pants.  Darla did not think it was that funny.  (But it really was.)

One of her most memorable moments of scared to the point of “flight mode” was the time she came down to the house when the kids were all smaller.  Nate had a fake white mouse that was attached to an orange glove.  (I am dying laughing even now.)  When she came in, I said, “Hey, look at Nate’s little pet mouse.”  She is terrified of mice (as I am frogs) and immediately started screaming.  I said, “It won’t hurt you.  Nate wears these gloves so he can keep a good hold on it.”  (Oh, gosh, wait a minute.  I may have to go tinkle.)  Darla just screams, “Get it out of here; put it up.” 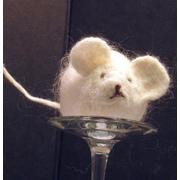 Which in little boy language is SIC!!  Go get her!  He was chasing her quicker than a mosquito sucks blood. (It is Halloween.)  And she ran all over that house like I’ve never seen her run before with Nate right behind her wiggling that fake mouse in his gloved hand and me yelling above the din, “It’s fake!”  She ran up the steps to the bedrooms and into a closet, slamming the door behind her and holding the knob so no one could get in.

I was laughing so hard.  I mean, really, I truly was trying to help.  It was hard, though, while bent over laughing like a hyena.  I ran right behind them yelling “It’s fake!” as best I could over her screaming “Get it out of here.”  After she got in the closet, I would like to say reason set in, but it didn’t.  We eventually had to confiscate the mouse-glove (Nate did not want to give it up) because, even though by then she knew it was not real, she had already worked herself up into a state (of insanity) and wouldn’t come out until I promised I had put the thing up where he couldn’t get it anymore.

Then there was the time in the shopping mall…