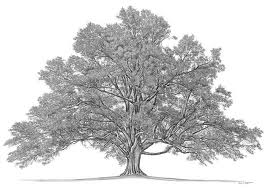 A small hobby of mine (meaning I’m not very good at it) is gathering information to fill out the big family tree.  You know the kind:  big, strong oak with huge branches all over, extending up to the heavens and as wide as the Mississippi River.  The tree with branches starting low so a person can jump right into it and start climbing all the way to the top, looking out over the world below, seeing things from a different perspective.

That’s part of the pull toward genealogical searches, you know.  That perspective thing, seeing family in a new way.  Coming across the secrets of why such-and-such happened or becoming flabbergasted at a totally surprising turn of events that were lost in the story telling or deliberately kept under the rug.  Appreciating the hardships of those who came before us, handing down their wealth of knowledge or monies or land or memories.  Seeing in one face from decades ago the very face of a relative today.

These are four brothers, my dad and his siblings.  Standing on the porch of the old home place, their farm.  Dad is the tallest, the oldest.  The last summer of his life the three of us — me, my sister and brother — took care of him spending days at a time.  We looked through old photo albums, took rides down through the country where Dad grew up, talking to first one and then another, with Dad pointing out where this one lived and that one lived.  Getting all sorts of information about his youth.

It was great until he pulled out the old army pictures one night.  I think he went back in time, oblivious to the fact that his daughter was sitting there listening to him reminisce about the army days, commenting on the pretty pictures of the girls.

Just TMI (too much information)!!!

Where has the time gone?!  I start these posts, have to quit for whatever reason, and then it’s a month or more before I get back to it. 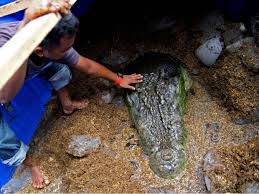 For the past couple of years I’ve been keeping up with the antics and adventures of Lolong, my favorite crocodile.  Even though he did eat several people!

So on occasion I would write about what was going on in the big thug’s life: his burst into stardom, how good he would look as a pair of boots, or even what a tasty meal he would make.

But today is sad news.  Lolong is dead!!  Of course, that is actually old news (this post was started on Feb. 11) but what you may not know is that he lives on!

A few days ago Steve and I received an awesome wedding gift in the mail.  My cousin out in Utah makes cards, and she sent us a whole batch of them… from Christmas and Easter cards to birthday cards.  They are just so cool I had to share them with you.

We received several great gifts on the day we were married, some really neat stuff:  wine from one of the local wineries; Christmas nativity along with sparkling grape juice; a personalized Christmas ornament to commemorate our wedding day; gift certificates; grilling set; a lovely rose bush; a neat plaque about remembering why we got married and love; small urns; cards with great sentiments;

If only it would have been Brenda Wood instead of Brenda Harlen!!

It’s from my cousin, Sandy.  She knew it was the  perfect gift for us.  It’s so perfect because our romance was so trashy, just like a good Harlequin book.  As a matter of fact, it’s the trashiest romance I have ever had.  For several years Steve and I have been neighbors and have had this trashy connection; but only late last year did it turn into a trashy attraction.

The picture below will explain it better.

Several years ago I decided to clean up my portion of the alley a little bit and hired someone to make a concrete pad for a barrel and compost bin.  It was supposed to have been on my property, but as you can see, my property ends at the fence and most of the pad sits on the property next to me.  So in order to keep peace with my neighbor and not have a fight over the legality of the trash, I have always told anyone who moves into the house next door to use the barrel and compost; I’ll pay the bill.

Steve moved in a few years ago, so on occasion I would see him at the trash site or in his garage a bit to the east of the trash site.  As time passed, he became caretaker of the trash site:  burning when it needed to be burned or got too full.  Worked great!

One rainy, summer, romantic evening as I was taking my trash out to the trash barrel, he asked me out… sort of… more like “You want to sit on your deck and shoot the shyte some night?”  I must have had on make-up.  Normally the conversation was “How’s it going?  I’ll burn that.”  Yes, appalled ecowatchers, we burn here in our rural area.  Unless it’s dry as a bone.  Or trash pickup is the next day.

As shocked as I was, I said sure.  After all, he was really good about keeping the trash all tidy and I may as well be neighborly.   We wound up getting hitched, and last week, when I got the trash bill for January…  I handed it to him.

No need to worry about who owns the trash site anymore.