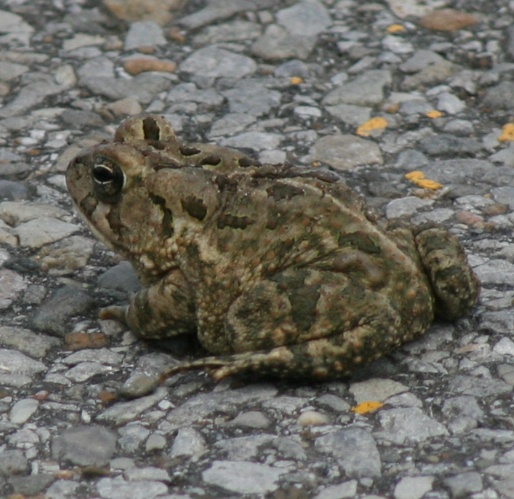 This picture gives me the heebie-jeebies.  I took it.  And let me tell you, it was one of the scariest and most nerve-wracking moments I have ever had during my picture-taking career.  The frog looks rather large in this picture, but that’s only because I cropped and enlarged it for the benefit of my devoted readers (whom I hope have not been traumatized by this photo).  By really looking at it in all its despicable ugliness can you get the full realization of why I am petrified of the monsters.  Thank the good Lord above it did not try to hop and attack me during this photo shot ordeal!

They get in the pool skimmer which inevitably causes one of many frog dilemmas.  Do I, as a big person, adult, grown-up, get this teeny, very dead frog out of the skimmer on my own, wearing rubber gloves and using a net, or do I call one of my trusted frog boys/men?  And just as inevitably I call one of my trusted frog boys/men because I know that when I am trying to get the nasty thing out of my skimmer it will touch one of my gloved hands, and I will immediately die of a heart attack.  (I am only thinking of my children and grandchildren! who need me!)

This is not a fear that comes from a movie perhaps titled “The Frog Attack” when I was small or even by my older brother bombarding me with live and/or dead frogs (lots of other stuff, just not that) or a freak frog phenomenon.  It’s genetic.  And I know it is genetic because my Cousin Sandy is just as petrified of the stinking things as I am.  (She also likes storms as much as I do.)

When I was trying to get the pool up and running, there were three baby frogs in the dry, painted pool.  Since I had banged up the fresh paint with one of my brilliant ideas (too tedious to go into), I had to repaint a few places.  And since Kate and Ava were here when I was painting those places, I had to buck up and put on my big-girl panties and pretend to love the ugly creatures… and got IN the pool with them and painted.  Of course, I had on knee-high rubber boots in the 90 degree weather and gloves as well.

Which just goes to show you that a mother’s and a grandmother’s love and sacrifice knows no boundaries.

4 thoughts on “Did I Mention How Much I Despise Frogs?”