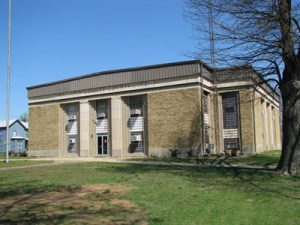 The front of the courthouse -- notice all the offices have window air conditioning units. The courtroom had none.

In my little section of the world life is slow.  We speak slowly (most not as slowly as I do); we move slowly (except when we drive); and we pretty well let things move along at their own pace.  We’re okay with that.

Our jury trials are no exception to that rule.  If you’ve read any of my posts before, then you know I am a court reporter working in small counties, and we have some interesting experiences around here.  Reporting proceedings on the fender of a car was a rather unique experience that I posted in Fender Reporting.

On one such particular day in the summer where the wind was barely moving and the back doors were open to try to get a cross breeze through to the front doors that were also open, we had a jury of 14 people sitting in the cramped jury box.  The air was thick, and we were all sticky.  When a fly would land on my fingers, that were moving rapidly, it just sat there, stuck on  my sweaty hand, enjoying the ride apparently.  I had to take my hand and literally sling the thing off of me.  (I really hate flies.)

Since it was so hot, the attorneys were without jackets, and I had taken to wearing sundresses and sandals.  It was way too muggy for hose and what-have-you.  We were a stinky lot.

And that must have been what attracted him.  He sauntered in through the back doors and down the hallway, stopped and looked into the courtroom.  I saw him, but didn’t think he would actually come in the courtroom.

But he did.  He came and placed all four big, black paws that were connected to his big, black Lab body right beside my chair and stared at me.  Now, I sit almost in the jury’s lap, so the dog and I were at the edge of the jury box.  My thought processing was in high gear.  “Do I say anything about a big, black dog being in the jury box?”  “Is anyone in the jury box afraid of dogs?”

In my great wisdom I decided to leave it be.  The proceedings were going full strength, and I just really couldn’t find a stopping point to say something to the judge.  As long as he didn’t start licking me, I decided he would just mosey on out in a bit. 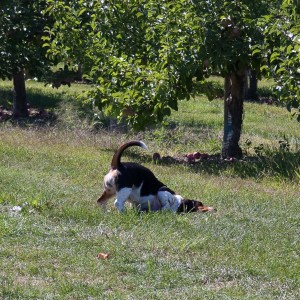 But he didn’t.  Instead he started sauntering down into the jury box.  And, of course, all eyes and attention was on the dog.  He was stopping to sniff first one and then another.  After all, he had found the stinky mother lode.  Would he want to jump in one of their laps to roll in the delightful stinkiness?

The attorneys and judge had no idea this dog scenario was going on, and they continued on with their questioning while the jury was undoubtedly not paying attention to anything but the dog.  My wee brain was once again in high gear.  “Is anyone afraid of the dog?”  “Do I say something?”  “Does it matter the jury is missing out on the evidence by dog disruption?”  “Will it bite if someone makes a sudden movement?”

In my great wisdom I finally said to our judge, “Excuse me, Your Honor.  There’s a big, black dog in the jury box.”

The judge turned from the bench and looked at me and smiled.  I again said, “There’s a big, black dog in the jury box.”  And he says, “You’re kidding, right?”

SAY WHAT?  Am I kidding?  I stop the proceedings of a jury trial to make a joke about a dog?  Now I wonder what he would have done if I had said, “Yeah, isn’t that a great one?”

But I didn’t.  I merely said, “No, really.  There’s a big, black Lab disrupting the jury.” 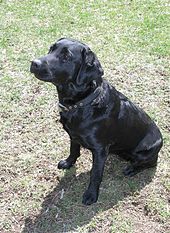 similar to our Juror Blackie

And about that time, as if to bear witness to the truth I had just spoken, Blackie (as I now call him) sauntered out of the jury box and into the bar area, slowly made his way down the aisle to the front doors, and went on his way.  As we all, transfixed, watched.

I am just grateful Blackie did not think I smelled “good” enough to lick or try to roll around on.

One thought on “The Mystery Juror”