It was a nice, sunny, summer day; not too hot; just right for a jury trial in our little rural circuit.  We had the jury all seated in the courtroom that would hold at least a hundred spectators if they so chose to come and watch the proceedings.  The courtroom was designed back in the day when people would do just that for entertainment:  come and sit in, listen to the proceedings, then proceed to go out and discuss the events as they sat around the town square on a Saturday night, taking a break to sit on one of the benches and chat in their weekly “going to town” for provisions trip.

The courtroom was also the place to be on election night, watching the numbers written and rewritten on the paper that was taped to the wall, going the full length of the wall, as new voting numbers were tallied then changed as precincts sent in their totals.  The place would be packed on those nights, seats full as well as people standing around the sides of the courtroom, spilling out into the hallways, leaning over the balconies from the open double doors on the second floor; 12 in all, allowing the upper hallway to be fully exposed.

But today’s jury trial wasn’t anything spectacular, a car wreck, more of a fender bender actually.  So there weren’t any observers.  This made it that much easier for all of us to file out to the road to view the damages to the car.  No observers to follow along, just the 13 jurors, the judge, and me with my writer. 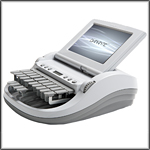 There were plenty of cars lining the road, all the jurors parked for their civil duty, so I had a nice fender to sit on while I took down the proceedings.

Today I use a shorthand machine, writer, that doesn’t use paper, all computerized with the proceedings all saved on a little disk about as big as my thumb.  Back those several years ago, my writer used paper that

rolled from bottom to top and lay in a tray awaiting storage and/or transcription.  As I was sitting on the fender of the vehicle, an automobile of some sort (glad it wasn’t a truck; the tailgate would be way too high), with my machine in front of me, I was furiously writing Q&A with comments thrown in occasionally by the judge.  Q&A in the reporting world is an attorney asking questions and a witness answering.  All was going well until the breeze.

A slight breeze blew up, I’m sure giving everyone a nice “Ah” moment… except me.  When the breeze blew, so did my paper.  Until the rain.  Now, even drops of rain will cause ink to run and smear.  So as the occasional raindrop fell, I would check to see how it had affected my notes.  Okay.  A small smear here or there, nothing I couldn’t figure out later on if I needed to.  Then it really began to sprinkle.  Hmmm.  No one but me noticing this little rain shower heading our way?     Business as usual.

I guess we would have continued the trial in the rain had I not eventually spoke up and told the judge the rain was causing the ink on my notes to smear, and if we didn’t go back in, I wouldn’t be able to read them later.   As if that was the catalyst to cause everyone to notice their surroundings, the judge agreed, and everyone hightailed it back to the courtroom.  Just in time.