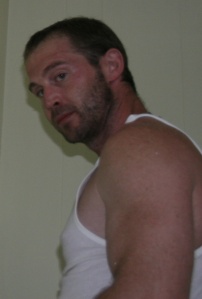 I cannot believe it!  He, the hard-working son, left with my car bright and early Saturday morning to get the pool paint because he was going to paint that afternoon, and I didn’t see him again until 4:30 that afternoon.  No paint.  What the heck?  He tried to explain how and why it was that he had been gone all day long without getting the paint for the pool, but, of course, he could not because that stinking alter ego worthless son kidnapped him.  Alas.  I shall catch that no goodnik one of these days, and get rid of him forever!

On the bright side, my little grandgirls were in the Kiddie Parade Saturday evening since it was rained out Saturday morning.  It was a rather small parade:  Kate and Ava and a little girl in the crowd we begged to get in it.  They made a circle in the road and that was it.  Rain has a way of changing plans and keeping them from getting back on course.  That is why I am still working on getting the pool painted:  the rain that caused the flooding.  But the girls had a great time even if the parade lasted all of three seconds. 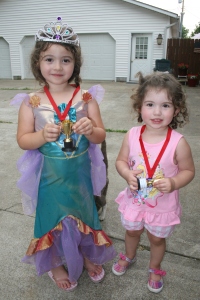 Little Ava went to sleep at 4:30, and the parade was supposed to be at 5:30, so right at the stroke of midnight, so to speak, she woke up and got to ride in the parade after all.  That three seconds was awesome for my sweetie pies.  There were some people gathered for the real parade that clapped, making Kate a star.

Ah, life in a little town.