My sis says everything a person can’t see at my  house is so organized.  My cousin Sandy says everything about me is disorganized, including the things a person can’t see.  My friend Cheryl says there is always hope; at least she hopes there is hope because she is a lot like me in the disorganization department.  My friend Bert has quit coming by to help because, well, it just never seemed to improve matters.  My friend from Texas, Terry, says she will most definitely come to visit but she is not doing any dishes.  Nor is my friend Kay.

… and seriously considering cleaning house next week.  Before it starts looking like this!

I have this site bookmarked for the sole purpose of saying “At least my house doesn’t look like that!”

Life would be so delightful if I were organized.  My blog would always be up to date with new posts and pics and recipes and good advice or awesome web sites for you to get coupons and free stuff.  Then I would be Freshly Pressed!  I need to be freshly pressed… every day.

Instead my little personality gets up and looks around at its rumpled little self, deciding to just wear what it already has on because, well, the chaos makes actually “getting it together” overwhelming.  How on earth does one become Freshly Pressed/freshly pressed?

I gave birth to “my baby” back in January of 2011.  My little blog has crawled along, sometimes actually getting up and walking really fast, but never quite getting to the point of where I imagined it would be at the end of the year.  And that is all my fault.  My appetite was tremendously starving for what life and I had cooked up for me, and I heaped way too many projects on my plate (hey, I am a Gemini) this past year, 2011, as usual.  BUT… I actually reached those goals!! And I documented them through my darling, little blog as I went along. 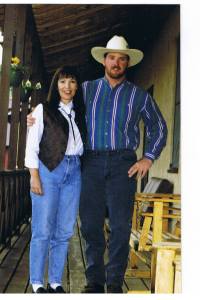 The tenth anniversary of my husband’s death was the impetus for this upheaval, this craving for living, this hodgepodge menu in my blog posting.  For a decade I had been stagnant, too full of grief over the losses and tragedies and heartaches I had endured.  What better way to break back into life than cooking and sharing that food with friends and then sharing the whole experience through a blog?

Though my goal changed from filling bellies with the magazine recipes I had been saving for years to feeding my readers with thoughts on various subjects, it has been a sharing together of not just my appetite for life, but some of yours as well.

Some of the goal dates came and went — contractors do that all the time — and were reached a little later than planned.  And, well, those recipes and awesome meals for all my old and new friends didn’t quite pan out (pun intended) although I did cook a couple of good meals and make some mighty fine mice for Christmas in December of 2010, the year I started my “revamp Brenda” recipe.  That recipe is still in the perfecting stage.  The important outcome of this past year, though, is my accomplishments!  In spite of needing a freshly pressed, got-it-all-together overhaul, I managed to do all this:

stained the fence and other outdoor wood.

cooked a couple of meals!

There were other little projects that were completed in 2011 that were on my list of to-do things.

That’s a good, good feeling that I hope to continue into 2012!

the tongue helps... really, it does

Giving piano lessons is one of the neatest things about getting the baby grand.  Of course, I wanted the grand for me, but I also didn’t want to give piano lessons on the little spinet I had.  (won’t give a brand name of the little spinet, but it’s just not a good piano)  And I did want to give lessons.  We need some new piano blood in our church.  Vickie and I aren’t getting any younger. 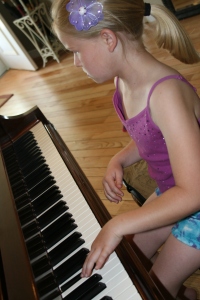 Emily is eight, and I am priming her for the church pianist.  She just started a couple of months ago, serious lessons, and she’s doing great.  I love to watch her throw her hands out to the sides to calm herself down for the new pieces.  And I love to watch her when she’s really practiced hard and knows her lesson well.

now she's getting it

Today’s lesson, the new lesson, was the theme from the Mickey Mouse Club.  It looks hard at first until she plays through it a couple of times.  Then she sees that really can get it.

And she really  likes it when we play the piece together.  We played a duet of Old McDonald today.  She was fantastic and very happy as she played it with me.

It’s just such fun when it all starts coming together.

Since I was out in the backyard digging in the flower bed (digging up sunflower seedlings), I almost missed my piano student.  I thought it was five… it was six.  This daylight savings time makes me lose track of the time.

Right now I am up to four students!!  Yippee!  I love it.

It’s so much fun to watch it come together as they learn to play.  And the books now are great; gets them moving on the piano with both hands right away.

My mom started me taking piano lessons when I was seven or eight.  Mrs. Jennings from Junction gave me lessons every Saturday.  When Darla started taking lessons — (Dar, tell that story) —

I would get to watch TV during her lesson.  There was always one of those weird Saturday movies on, a Japanese movie with dubbed in English, black and white, something like that.  They were great!

Mom made me practice maybe not every day, but often.  She wanted me to play piano at church, and when I was around 12, she got her wish.  It may have been with one finger a lot of times, but I began playing around then.  And so did Vickie Jerrells (now Vickery).  Vickie plays the organ (the best I’ve ever heard) and I play the piano.  We have played together at church for many, many years now with some intermittent times of playing with other people.

wish we had one of these at church

ours isn't quite this big

I can see us still playing when we are very old, our hands all gnarled with arthritis, pounding away because we can’t hear, with sour looks on our faces because… well, we’re all old and gnarly.  That’s enough reason to look sour!