Ava turned five this past April, so as is the custom we started just three years ago when Kate turned five, we were all going to pack up and take the girl’s first train trip to Chicago to the American Girl doll emporium.  Stay a couple of nights in the big city.  Cost Giggy a lot of money. But since Queen Keely (Momma to the little princesses) has a birthday only two days later than Princess Ava, and her birthday fell on a weekend this year, Momma wanted to do something on her own.  Like big girls do sometimes. So we have postponed the big trip and instead I decided to give her the big birthday party Ava has been wanting since Kate’s pool party this past summer with the awesome “fish” cake that I made.  That cake was totally not awesome in the eyes of any professional or novice cake maker, but it was a BIG hit with the little people crowd!  And Ava wanted one just like it for her princess party.

I talked her into a princess cake instead, but I think she would have rather had the fish cake.  The poor little princess had to go into  semi-cooled layers of cake causing her beautiful dress to melt… just a little.  She looks about like the fish cake:  a definite DIY!

partying it up at Pirate Pete’s

The crew didn’t care if our little cake was melty or not.  They ate it the way cake is supposed to be eaten!  After they had played laser tag and climbed and tumbled and gamed and got tickets out the wazoo. But that was the second party!  The first one was the one with the castle! 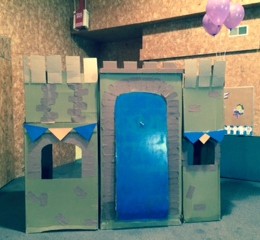 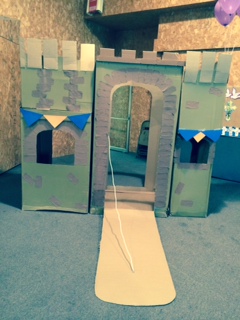 with the drawbridge down

The little princess at the party had a great time playing in the castle, letting the drawbridge down and pulling it back up, posing for pictures in the windows.

I’m not all that creative, but it turned out just fine.  If you are into those DIY projects, click on castle to make your own.