Last month, as most of you know, I married Steve.  We made vows to one another.  And we put inscriptions inside our rings that we didn’t let one another know until the ceremony.  So in the pictures on the left and the right are as we are putting on the rings and telling the inscriptions.  Good stuff.  I almost forgot mine!  Had to start over!

Yesterday was our one month anniversary.  I had mentioned to Steve  last week that it was coming up and what was he going to get me.  Can you say freaked out!?!  His mind was racing about what kind of gift a person gets their spouse for a one-month anniversary.

After giving him a few seconds of pure panic, I told him I had his all picked out, knew just what I was getting him.  His eyes were huge!!!  At that point I couldn’t hold it together any longer and told him what his was.  You are not privy to that little tidbit of knowledge, but he was very relieved that he didn’t have to go out and purchase a gift.  And lest you let your mind get in the gutter… it was something as benign as tickling a child’s back.

Beginning the new year always sets our minds in motion for making vows we want to keep throughout the year.  My friend, Jodi Duncan,  an awesome flower gal, has a blog/website (it’s in my blogroll on the right) with the perfect quote for beginning the year: 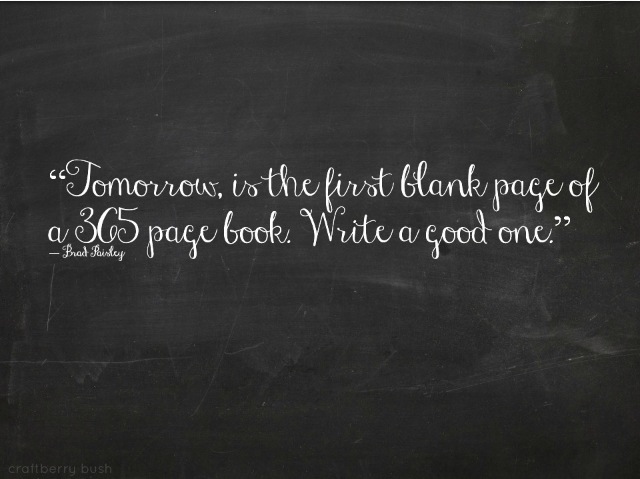 This year I am vowing to write some better quality material for my blog, some stuff that takes a little research, that is close to my heart; as well as write some of the same stuff: family, tidbits, and, of course, food!

The cooking abounds around here.  I should have been documenting this with pictures because it has come out beautifully although one was a recipe from the back of the lasagna box instead of my saved, valuable magazine recipes.  Maybe I should put them in a safe?  And there was the beef roast that I doctored up a bit that came out great… along with the gravy!!  The pecan pie was eaten in two days as were the apple dumplings.  Pecan pie recipe came from the Karo syrup bottle and the apple dumplings came from this neat little book on apples that I have although I just used Pillsbury rolled pie dough.

My Bible is out and so are one of the numerous Bible study books that I have.  This year I am going to do at least some of them.  There are other vows as well that I won’t go into detail about because, well, you should all have some of your own.  So far I am keeping them, working toward them in baby steps.

Vows are good.  Especially when we adhere to them, give them the importance they deserve in our hearts and minds.