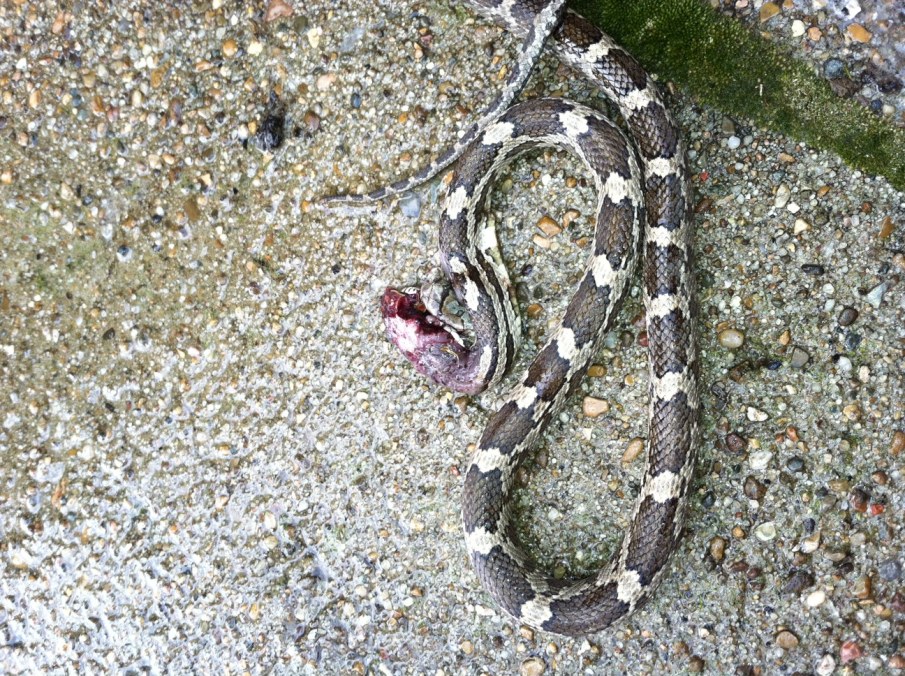 is why I dread cleaning THIS:

The pond with soon-to-be waterfall

As I was cleaning cobwebs off the screened in porch the other day, something in between the house siding and the 4×4  to the porch moved.  “What is that?”

Squeal!! Jump up and down!!  Squeal!!  (Continue that scenario for a full minute.)

A SNAKE!!!  It looked to me to be about 20 feet long and extremely venomous!  How I can tell that by only glimpsing a movement from between the crevice it was curled into is amazing.  I guess I am just snake savvy like that.

The stone waterfall/pond will be a breeding ground for the slimy, slithering serpents!  So I think I will get my nephew to clean it.

After all, the two gals from down the street came down and killed the man-eating snake on my porch!  They came at the beck and call of all the children that were playing at the house that day.  Three of the kiddos belonged to my saviors and the other two were my little grandgirls.  After we all squealed and screamed and eyeballed the evil creature, the kids ran for help while I kept a vigilant watch lest it should slither into my house.

The kids and I made way for the grand entrance, and my two brave warrioresses made the first blow with the bright blue broom as they whacked away with the bright blue dust pan and the wire clothes hanger.  At one point the snake grabbed onto the hanger but the girls finally got it to the floor.  The braver of the two… or should I say the one not putting quite enough thought into the idea… started stomping on it.  Prompting the snake to whirl around and bite her on the foot.

This prompted said snake handler to begin cursing the blankety-blank snake that bit her!  And then curse it some more.

By then I had come to my senses and had gotten a shovel with which the brave young woman (the injured one had gone home to pour peroxide on her foot) finished the job.  We all stood around and gaped in wonder that a python/asp/rattler/only-a-king-snake had gotten on my porch.

But right now, as the weather warms up, the snakes are all over the place.  We had an extremely warm winter.  So I guess we are having an extreme surplus of snakes!