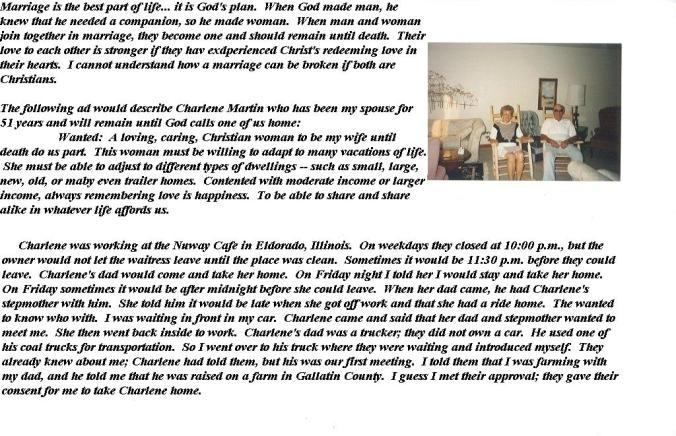 Here, in Jack’s own words, is how the day of their wedding began:

“It was a cold, wet day on January 13, 1947, on a Monday morning that I drove from our home on Eagle Creek to Charlene’s home to get her.  Then we went to John and Reba Bradley’s home near Junction.  They were going with us to Morganfield, Kentucky, to witness our wedding.  I had a 1939 Ford car which had over a 100,000 miles showing.  No telling how many times the speedometer had been run back.  It was the last year that Ford had placed the shift lever on top of the transmission extending from the floor.  For some reason that I can’t remember, Charlene and I went through Equality on our way to get John and Reba.  When we went to approach Route 13, I hit the shifting lever to put it in second gear, and the shifting lever came out of the transmission and fell in the floor on Charlene’s side of the car.  By this time I was out on the highway.  The transmission had shifted into second gear before the lever came out or at the same time.  I thought about driving on to John and Reba’s in second gear, then I noticed the entrance to Pekin Coal Mine, so I turned in.   I picked up the shift lever and put it back down in the transmission.  I held the clutch pedal down and started the engine and gently shifted from second to first gear.  It worked okay, so we went on our way.  Every time I had to shift, I did it gently.”

Jack and Charlene raised three children together over their 50-some years together.   She had a stroke and for many years Jack was a gentle and loving caretaker before she went home to be with their Lord, leaving Jack behind.

Here are Darla’s words of her father-in-law’s care for his wife while she was in the nursing home:

“Jack was always so kind….he loved and cared for her until the end.  One day I was sitting in the sunroom at Fountain View with him and her, and he was taking lotion and dotting a Kleenex with lotion, working at getting the dry skin off of her face.  It was like time had stopped for a second.  And when I looked around, everyone was watching..a nurse, other visitors and residents of the nursing home. It was right then that I knew why she was still here (because at this time in her life she had lost her speech).  So others could see Jesus’ love through Jack Martin caring for his wife. “

And they were one heck of an example of a great love story!

One thought on “The Love Story of Jack and Charlene”