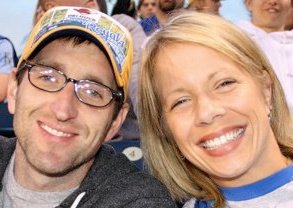 This is a great love story!  Amanda fell in love first.  It wasn’t until they were both in Mexico City, Mexico, as they were part of a team from their church doing some ministry down there that Wes fell in love.

He said just after a period of praying that he lifted his head up and there was Amanda.  And he just fell into this huge, engulfing puddle of complete and utter love… which, of course, was Amanda.

The pastors say after that revelation that Wes was pretty useless.  He couldn’t quit with the google-eyed looks of love at his sweetie.

Amanda, on the other hand, knew how Wes was in their relationship.  She wasn’t telling anybody until she knew it was the real thing.  And, well, Wes was telling everyone.  They eventually married and have had some heart-breaking as well as wonderful experiences.

To read all about them, go to their web site:  http://wesleymartin.org/about/