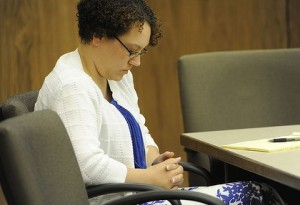 Jessica Beagley appears in court during her trial in Anchorage. Photo: AP

So the mom that wanted to be on the Dr. Phil show sits before a jury and is subsequently convicted of abusing her son.  As she should be.  I think part of her punishment should be a mouth full of the hottest peppers they can find for her yelling at a seven-year old the way she did.  Did I misunderstand?  This was all about pencils at school?  If it was that bad, where was the principal?  Why didn’t he step in and mete out some sort of disciplinary measure?  Perhaps writing sentences with a pencil  maybe?  We used to have to do that in school.  I can remember writing lines, and I hated doing it!

Where is America’s outrage at Dr. Phil?  I see it at the mother.  Thank goodness we didn’t wait until this little child became another Caylee Anthony or the mother would have been acquitted.  It seems as though America has become so indoctrinated to political correctness or inundated with crime sitcoms or increasingly stupid that they can’t see guilt when it’s sitting in front of their nose.  Circumstantial evidence?  It’s all circumstantial evidence unless there’s something like a video of a mom pouring hot sauce in her seven-year-old child’s mouth and screaming in his face.  That doesn’t happen very often.

Maybe if Dr. Phil would start a program called “Murdering Moms” we would have had little Caylee’s horrible death on video as well.  As it is, we only have all the other evidence.  And personally, the fact that her mother didn’t even report her missing for a whole month but partied it up instead is enough to find her guilty.  There are a lot of people convicted of killing someone that didn’t pull the trigger, but because they were a party to it, they are just as guilty.  It doesn’t matter that we don’t know who did it; it’s beyond a reasonable doubt.  And I reasonably doubt that little Caylee’s mom didn’t have anything to do with her death.  Guilty.

I am here to tell you that Dr. Phil is guilty, too.  Just about as guilty, and maybe even more so, than the people he is encouraging to abuse their children for his financial gain.  It makes me sick.

Why isn’t Nancy Grace all over this?  Why hasn’t America called for Dr. Phil to be called out and put on the stand before a jury for possessing child abuse videos?  And making them!

Where is our outrage at things that matter?